Seeking Freedom: The Untold Story of Fortress Monroe and the Ending of Slavery in America by Selene Castrovilla, illustrated by E. B. Lewis

Seeking Freedom: The Untold Story of Fortress Monroe and the Ending of Slavery in America by Selene Castrovilla, illustrated by E. B. Lewis, Calkins Creek, 2022. 9781635925821 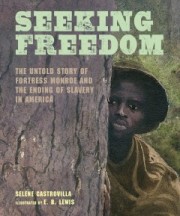 What did you like about the book? Who was George Scott?  He had been an enslaved person who had sought freedom, living in the Virginia woods for two years when he heard about Fortress Monroe where formerly enslaved persons were not being returned to their enslavers in 1861.  The Union Fort was in the control of Major General Benjamin Franklin Butler who considered the enslaved persons “contraband: property used for warlike purposes against the government of the United States – (that) could be legally confiscated.” When George Scott met with General Butler, he told the general that he had seen Confederate soldiers “skulking” in the woods. Scott located the soldiers and, reporting to Butler, an ambush was planned – which the Union Army lost.  But the Confederate Army did flee, beginning the fight for freedom from slavery in the United States. This little-known glimpse of Civil War history fills in gaps that are so essential in creating a fuller picture of the history of this country.  Supplemental information is included detailing the Aftermath of the “contraband” people, a brief history of Benjamin Butler, George Scott and Fort Monroe in Hampton, Virginia.  A bibliography is also appended. The full, two-page illustrations appear to be done in watercolor; they are misty, dark and atmospheric.  Some photographs are also included in the supplemental material.

Anything you did not like about the book? No, perfect.

To whom would you recommend this book? This is an important and essential addition to all books on American history, the American Civil War and Black history.

Who should buy this book? Public and elementary school libraries

Should we (librarians) put this on the top of our “to read” piles? Yes.