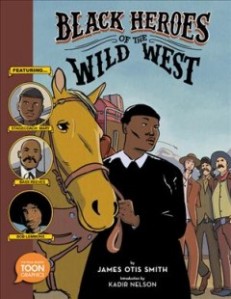 What did you like about the book? A book long overdue.  With a graphic format, drawn in pen and ink on Bristol board and then colored digitally by Frank Reynolds, three unsung heroes larger than life are given some credit for peopling the Old West.  Mary Fields, born a slave on a Tennessee plantation in 1832, became a chamber maid on a steamboat after Emancipation in 1865.  Mary went on to raise five orphaned children, build a mission house, play poker, open a café in Cascade, Montana, deliver mail and much more.

Bass Reeves, fled slavery in Arkansas to live with the Indians until the Emancipation took place becoming a Deputy US Marshall.   He was the first Black marshal west of the Mississippi River, bringing over 3000 fugitives to justice.  It is thought that Bass Reeves was actually the original Lone Ranger – but early television shows depicted all heroes as white.

Bob Lemmons was a mustanger who developed his own unique way of capturing wild horses.  He also had been born a slave who eventually had his own ranch with herds of cattle and wild horses.  He died in 1947 at the age of 99.

The role and place of African-Americans in U.S. history has been neglected for too long.  This book remedies a tiny bit of that.  It also includes photographs of the three heroes examined here along with Afterwords concerning Cattle drives and railroads, Barbed wire, Buffalo soldiers, the origin and history of Cowboys, African Americans on the frontier and Black women pioneers.  There is also a timeline of the era from 1609 -1916.  Plus Further reading and resources.  This is a total gem!

Anything you did not like about the book?  No.

To whom would you recommend this book? This book is so valuable for many audiences: Black History Month, African-American history, Heroes of the Wild west and anyone just wishing to expand their knowledge of American Black history.

Who should buy this book? Public, elementary and middle-school libraries and 4-8th grade classrooms

Where would you shelve it? Non-fiction graphic novels 978.78

Should we (librarians) put this on the top of our “to read” piles?  Yes!