Skunk and Badger – by Amy Timberlake, illustrated by Jon Klassen 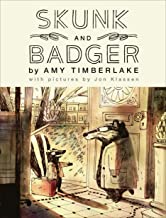 What did you like about the book?  Badger is a loner, living in Aunt Lula’s brownstone, which she has kindly lent to him so he can pursue HIS IMPORTANT ROCK WORK. But one day, his peace is shattered by the arrival of Skunk, chef extraordinaire and friend to chickens. “Not everyone wants a Skunk” as a roommate, Skunk sadly announces, but Badger doesn’t want any roommate. And so this odd couple journey begins, with the Badger fussing over his specimens, but enjoying Skunk’s cooking and winsome imagination. He even likes the 100+ chickens that show up for storytime. Of course, there’s a brief fallout, following a stoat appearance and a release of skunk stink. But once the lively skunk is gone, Badger regrets his words and goes off to find his pal. The animals speak in long sentences with a sophisticated vocabulary; clearly this is meant as a read aloud and harkens back to droll British classics like Winnie the Pooh and The Wind in the Willows. Jon Klassen’s excellent illustrations include several dark and intricate watercolors with pen-and-ink crosshatching, showing us Badger bent over a geode in his dark rock room and alone in a deserted park, wistfully wishing Skunk back. Smaller, half-page sketches in pen-and-ink linger on other story elements (Skunk’s bedroom, the animals eating together, the stoat attack).

Anything you didn’t like about it? Not much happens and honestly, Badger was tiresome enough to be boring. I found the world building totally off. The setting (“North Twitch”) didn’t make sense to me; why were the animals living in a brownstone? I also couldn’t work out what was up with Skunk and his chicken friends. Why were the chickens always around and why so many? Actually, skunks and badgers (just like stoats) eat chickens. Why could the mammals speak but the chickens only cluck? It’s possible these absurdist elements would be someone else’s cup of tea, but they didn’t do much for me.

To whom would you recommend this book?  I think Timberlake was going for the slightly daffy feel of the British authors I’ve named above, or even Beatrix Potter, so families looking for an old-fashioned read-aloud might be drawn to this. Or a classroom teacher looking for a new chapter book read aloud for grades 3-5. It could generate discussion about friendship and the need for compromise to sustain it.

Who should buy this book? Public libraries

Where would you shelve it? Fiction

Should we (librarians/readers) put this on the top of our “to read” piles? No