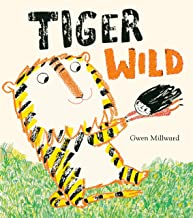 What did you like about the book?  Exuberant artwork and an emphatic tone are the main selling points of this picture book about getting angry. Originally published in the U.K. in 2018 under the title Tiger Lily, this British import is about a little girl (5 or 6?) named Lily whose alter ego or imaginary friend (unclear who he really is) Tiger regularly expresses regret at his circumscribed life by drawing on furniture, devouring special cupcakes or destroying knitting projects. Penny (the mom? older sister? babysitter?) sends Lily to her room after she announces that Tiger ISN’T SORRY. Rather than accepting their punishment, Lily and Tiger run away. But as the sky darkens, Lily regrets Tiger’s rashness and makes her way back to her warm bed and Penny’s love. After that, Lily and Tiger (and sometimes Penny) only go wild now and then. The book is printed on heavy cream-colored paper with child-like crayon scribbles that capture a lot of energy, but also have a sweetness to them that belies Tiger’s wildness. Lily and Penny definitely look like early Maurice Sendek characters from the Nutshell Library, with their simple outlines, big eyes and triangular noses. And Tiger is an adorable pastiche of scribbled orange, black and yellow whose simple features range wonderfully from fierce, to droll, to happy. The artwork moves seamlessly from touching vignettes to whole page spreads, from distance shots to close-ups, which all imbue the book with a high level of visual sophistication.

Anything you didn’t like about it? Alas, the storytelling is not the equal of the dazzling artwork. This is such a classic and frequently told tale (Where the Wild Things Are, When Sophie Gets Angry, No David!) that retellings have to be innovative to compete; this one is not. I also found Lily to be surprisingly flat, despite Tiger’s antics. Why does she feel so hemmed in and angry about it? There’s no introspection about her bad behavior and her “I’m sorrys” seem self-serving. I also found Penny’s presence mystifying. She looks like a slightly older version of Lily and didn’t provide the needed adult heft to trigger Lily’s rebellion.

To whom would you recommend this book?  The cute artwork and theme of anger management would suit children age 3 to 6, but for an adult looking for a read aloud on the topic, I’d be inclined to recommend one of the titles referenced above. For little iconoclasts everywhere, I’d suggest Peter Brown’s brilliant Mr. Tiger Goes Wild (2013.)

Who should buy this book? Public libraries

Where would you shelve it? Picture books

Should we (librarians/readers) put this on the top of our “to read” piles? No