Astronauts: Women on the Final Frontier by Jim Ottaviani, illustrated by Maris Wicks 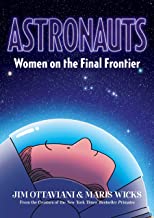 What did you like about the book?  The stuff I didn’t know about American women in space! In this clear, concise and entertaining book, Ottaviani tells the story of the space program from the point of view of Mary Cleave, engineer, former NASA administrator and veteran of 2 space shuttle flights. The story opens with Mary as a little girl, disappointed that Eisenhower wasn’t allowing women into the space program. Side-by-side narratives walk us through the Mercury 13 testing (13 women) and the first Russian female cosmonaut in space. Following Mary as she becomes a scientist and a pilot, we get to see NASA make its first steps toward an integrated workforce and the strengths that diversity brought to the program. I even learned that Nichelle Nichols (Uhura on Star Trek) was integral to NASA’s campaign to become more inclusive. Ottaviani doesn’t shy away from the outdated attitudes and daft assumptions that female astronauts battled, but their can-do attitude and good humor, as well as support from key allies, led the way to success.  Clear lettering and realistic illustrations mean that there’s plenty of science and history to be gleaned from the narrative. Wicks’ work is especially strong in depicting the sense of comradery between the women and the beauty of space.

Anything you didn’t like about it? In the early sections of the book set in the U.S.S.R., some attempt is made to include a Cyrillic style and  letters into the talk bubbles, specifically, the substitution of И for N, which didn’t make any linguistic sense and made decoding difficult.

To whom would you recommend this book?  Kids and adults interested in women in space. For those who have enjoyed Tanya Lee Stone’s Almost Astronauts: 13 Women Who Dared to Dream, this will extend the story.

Who should buy this book? Elementary, middle and public libraries

Where would you shelve it? I will probably put mine in graphic novels as I have so many readers who love the format irregardless of content. If you want to put it in nonfiction, then 629.45.

Should we (librarians/readers) put this on the top of our “to read” piles? Yes