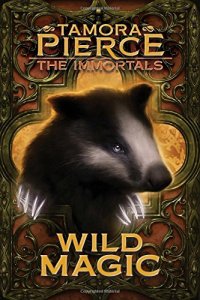 What did you like about the book?  Wild Magic, set several years after the end of Pierce’s beloved Song of the Lioness Quartet, starts off the four-book Immortals Quartet. The main character, Daine, has an unusual magic that connects her to the creatures of Tortall. Her ability to convey information to and from the animals makes her a powerful player in Tortall’s burgeoning fight against a new menace – Immortals that appear to have been released from The Realm of the Gods where they had been imprisoned for hundreds of years. This re-issue of Wild Magic, which was first published in 1992, features a new cover and Afterword. The eighth grade student in my school who is the resident Tamora Pierce expert gave her stamp of approval, saying that she thought the new cover was more accurate to what happens in the story. The twelve page Afterword reveals some fascinating insights into Pierce’s process when writing.

To whom would you recommend this book?  Recommend to fans of fantasy adventure, especially girls, since the main characters are feisty, heroic females.

Who should buy this book?  Middle schools, high schools, and public libraries can look to this new edition to spruce up books in the series that are looking worn out from constant use.

Where would you shelve it?  Shelve in Fiction or with Fantasy if you have Genre shelving.

Should we (librarians/readers) put this on the top of our “to read” piles?  Yes, if you like fantasy.

Like Loading...
This entry was posted in *Book Review, *Starred Review and tagged Atheneum Books for Young Readers. Bookmark the permalink.